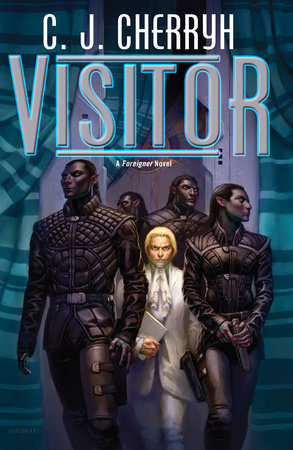 The seventeenth novel in Cherryh’s Foreigner space opera series, a groundbreaking tale of first contact and its consequences…

The human and atevi inhabitants of Alpha Station, orbiting the world of the atevi, have picked up a signal from an alien kyo ship telling them that the ship is inbound toward Alpha. Five thousand of the inhabitants of Alpha are human refugees from the now derelict Reunion Station. They have seen this scenario before, when a single kyo ship swooped into the Reunion system and, without a word, melted a major section of Reunion Station with a single pass. These refugees, who were rescued through the combined efforts of an allied group of humans and atevi and brought to safety at Alpha, are now desperate with fear.

Bren Cameron—brilliant human emissary of Tabini-aiji, the powerful atevi political leader on the mainland below, and also the appointee of the human president of the island nation of Mospheira—is the obvious choice of representative to be sent up to deal with both the panicked refugees and the incoming alien ship.

As a member of the spacefaring delegation who rescued the refugees, Bren has talked to kyo before—and even won their trust by saving one of their kind from a Reunioner prison. Because of his remarkable diplomatic and linguistic abilities, Bren managed to communicate with that grateful kyo individual on a limited basis, and he has evidence that that same kyo is on the ship heading to defenseless Alpha Station.

But no one can predict what an alien race might do, or what their motivations could be.

And Bren Cameron, the only human ever to be accepted into atevi society, is now the one individual with a hope of successfully interacting with the crew of the incoming ship. But Bren knows it will take putting himself in the hands of the kyo.

Can Bren count on the gratitude of one individual alien to save his life and the lives of thousands on Alpha Station?

Praise for the Foreigner series:

"This is the kind of anthropological SF of which [Cherryh] is an acknowledged master." —Booklist

"A seriously probing, thoughtful, intelligent piece of work, with more insight in half a dozen pages than most authors manage in half a thousand." —Kirkus Reviews

“One of the best long-running SF series in existence...Cherryh remains one of the most talented writers in the field." —Publishers Weekly

“This is one of the best science fiction series currently running….by this point, the series has turned into a complicated set of thrillers involving political and factional turmoil, as well as a close and detailed examination of the troubled interactions between human and alien cultures.” —Strange Horizons

“Cherryh plays her strongest suit in this exploration of human/alien contact, producing an incisive study-in-contrast of what it means to be human in a world where trust is nonexistent.” —Library Journal

"A large new novel from C.J. Cherryh is always welcome. When it marks her return to the anthropological SF in which she has made such a name, it is a double pleasure. The ensuing story is not short on action, but stronger (like much of Cherryh's work) on world-building, exotic aliens, and characterization. Well up to Cherryh's usual high standard." —The Chicago Sun-Times

“[Cherryh] avoids any kind of slump with a quick-moving and immediately engaging plotline, and by balancing satisfying resolutions with plenty of promises and ominous portents that are sure to keep readers’ appetites whetted.” —RT Reviews

“These are thinking man’s reads with rich characters and worlds and fascinating interactions that stretch out over many generations.” —SFFWorld

“Cherryh's forte is her handling of cross-cultural conflicts, which she does by tying her narrative to those things her point-of-view character would know, think, and feel.”—SFRevu

"The Foreigner series is about as good as it gets...so finely and densely wrought that you may end up dreaming of sable-skinned giants with gold eyes, and the silver spun delicacy of interstellar politics." —SF Site