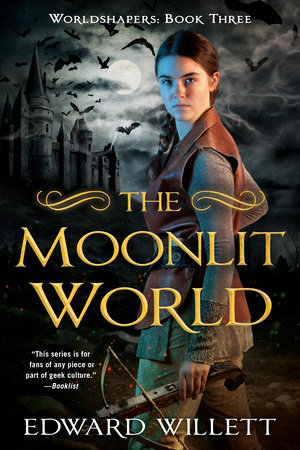 The third book in the Worldshaper portal fantasy series by an Aurora Award-winning author, in which one woman's powers open the way to a labyrinth of new dimensions.

Fresh from their adventures in a world inspired by Jules Verne, Shawna Keys and Karl Yatsar find themselves in a world that mirrors much darker tales. Beneath a full moon that hangs motionless in the sky, they’re forced to flee terrifying creatures that can only be vampires…only to run straight into a pack of werewolves.

As the lycanthropes and undead battle, Karl is spirited away to the castle of the vampire queen. Meanwhile, Shawna finds short-lived refuge in a fortified village, where she learns that something has gone horribly wrong with the world in which she finds herself. Once, werewolves, vampires, and humans lived there harmoniously. Now every group is set against every other, and entire villages are being mysteriously emptied of people.

Somehow, Karl and Shawna must reunite, discover the mysteries of the Shaping of this strange world, and escape it for the next, without being sucked dry, devoured, or—worst of all—turned into creatures of the night themselves.

Praise for the Worldshaper series

“This novel sets up a fascinating, fluctuating universe with plenty of room for growth for the main characters, and readers will eagerly join their journey.” —Publishers Weekly (starred review)

“This series is for fans of any piece or part of geek culture. With the infinite possible worlds in the Labyrinth, every book should be a new, enjoyable adventure.” —Booklist

“It leaves the characters in places such that the next book promises to be very exciting from the get-go. Check it out if you like alternate world sci-fi/fantasy. It’s a fun, quick read.” —Game Vortex