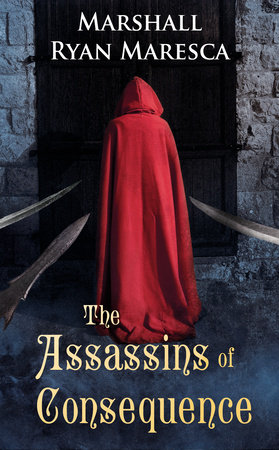 The Assassins of Consequence

The autumn semester at the University of Maradaine is underway, and Veranix Calbert is doing his best to balance the new responsibilities of being a fourth-year magic student under the militant Altarn Initiatives, while still acting as The Thorn, the street vigilante deep in a personal war against the drug kingpin Willem Fenmere. With the help of his friends Kaiana, Delmin, and Mila, he’s been able to strike real blows against Fenmere’s empire.

But Veranix’s fight has earned him more enemies than just Fenmere, including the mad alchemist Cuse Jensett, the imposters Erno Don and Enzin Hence, and the Deadly Birds Magpie and Jackdaw. These five killers join forces to escape Quarrygate Prison and offer an alliance to Fenmere, bringing with them the perfect leverage to seal the deal: the Thorn’s identity.

Once Fenmere knows who Veranix is, he doesn’t just want to kill him, but to utterly shatter him. Calling on everyone in Maradaine holding a grudge against the Thorn, he unleashes a brutal hunt against Veranix.  With old and new enemies all looking to claim the bounty on his head, stripped of the security of his secret identity, Veranix faces the most brutal fight of his all too-short life.

"Maresca’s doughty heroes remain sturdy as ever, and the story moves with lightning speed. Fantasy adventure fans will enjoy this action-packed thriller, and series readers will be gratified to see all the pieces come together." —Publishers Weekly

"This epic adventure is hard to put down, leaving readers curious about the future progression of these characters while smoothly setting up the next adventure." —Booklist

"The Way of the Shield is at its best when they’re running around in the streets getting themselves beaten up by political subversives and the constabulary, and dealing with the consequences of their decisions. Maresca writes solid action scenes and has an eye for the believably absurd." —Locus

"In one fast-paced, funny, highly readable novel after another, Maresca continues to build out every nook and alleyway of Maradaine, which is fast becoming one of the most richly detailed settings in fantasy." —Barnes & Noble Sci-fi and Fantasy Blog

"It’s a story about morality, about sacrifice, about what people want from life. It’s a fun story–there’s quips, swordfights, chases through the streets. It’s a compelling, convincing work of fantasy, and a worthy addition to the rich tapestry that is the works of Maradaine." —Sci-Fi and Fantasy Reviews

"I love the complexity of Marshall Ryan Maresca’s worldbuilding as the vast conspiracy underlying all the inner workings of Maradaine is emerging through the intertwining pieces coming together. It’s nothing short of brilliant!" —Fresh Fiction

"Highly recommend this series to anyone who loves high fantasy, political intrigue, magic, fantastic world building, and characters who you can root for." —Gizmo's Reviews