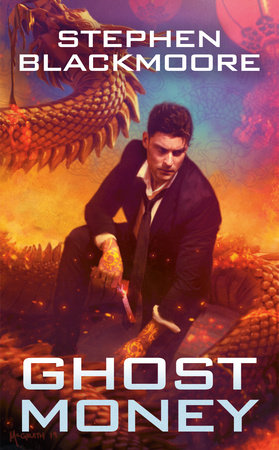 The fifth book of this dark urban fantasy series follows necromancer Eric Carter through a world of vengeful gods and goddesses, mysterious murders, and restless ghosts.

The Los Angeles Firestorm killed over a hundred thousand people, set in revenge against necromancer Eric Carter for defying the Aztec god Quetzalcoatl. Carter feels every drop of that blood on his hands. But now there's a new problem.

Too many ghosts in one spot and the barrier separating them from the living cracks. And when they cross it, they feed off all the life they can get hold of. People die. L.A. suddenly has a lot more ghosts.

But it's not just one or two ghosts breaking through: it's dozens. Another mage is pulling them through the cracks and turning them into deadly weapons. Eric follows a trail that takes him through the world of the Chinese Triads, old associates, old crimes. And a past that he thought he was done with.

Carter needs to find out how to get things under control, because if more ghosts break through, there's going to be even more blood on his hands.

Praise for the Eric Carter series:

"Demons and dark magic and gods of death: what's not to like? Blackmoore's hard-charging prose hits like a bullet fired from a cursed gun.... Fast becoming my favorite urban fantasy series, Broken Souls is a welcome addition to the necromancer chronicles of Eric Carter. Read this book. Read it now." —Chuck Wendig, author of Wanderers

"Eric Carter's adventures are bleak, witty, and as twisty as a fire-blasted madrone, told in prose as sharp as a razor. Blackmoore is the rising star of pitch-black paranormal noir. A must-read series." —Kat Richardson, author of the Greywalker novels

"Broken Souls is a deliciously gritty thrill ride. I can't get enough of Stephen Blackmoore's warped imagination and superb noir sensibilities. This is a must-read for any fan of awesome things." —Jaye Wells, author of the Sabina Kane series

"Fans will find plenty to enjoy in the long-awaited third outing of necromancer Eric Carter. Blackmoore infuses his increasingly detailed and dangerous urban fantasy landscape with grim yet fascinating characters, and ensures that every step of Carter's epic journey is a perilously fascinating one." —RT Reviews (top pick)

"The entire series toes the line between gritty and dark but with heart. It ramps up the shock value and the tension without ever feeling like you've crossed the line into something uncomfortable and unreadable. Tight prose, memorable characters." —Fantasy Writers' World